They fought BMC with info power 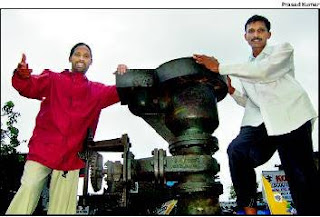 W FOR VICTORY: Yes, for residents of Chimatpada in Andheri (E), ‘victory’ starts with ‘w’; they had to wait for nearly six years, and really slug it out with the BMC, before they got water in their taps

Mumbai: For five years, the bestcase scenario for residents of Chimatpada in Andheri (East) was a trickle of water at their homes; and, often, there would be none at all. All their missives to the ward office just added to the heap of files. But all that changed in eight months, thanks to the determination of two men, which forced the Brihanmumbai Municipal Corporation to give 25,000-odd residents of this neighbourhood access to good drinking water that, many believed, was one of their most basic rights. The first letters sent by Chimatpada resident Ravi Nair and local AGNI activist James John failed to get officials moving. But, in the process, they learnt that the BMC had already allotted Rs 1.12 crore for a cross-connection from a main line from which pipes of a bigger diameter would be laid to Chimatpada. But all progress, unfortunately for residents of Chimatpada, was evident only on paper. “The BMC initially said they could not lay pipes because the traffic department was not allowing them to dig the road,’’ Nair said. So he did the next logical thing; he pursued the case with officials of the traffic department and learnt that verbal permission was given to the BMC some time back. An entire area was, therefore, going dry because the BMC never bothered to follow up on the permission with the traffic department. “It was just a matter of procuring this piece of paper for permission. And, when we produced the traffic department’s reply to the BMC, they immediately started the work,’’ John said. It took just two letters and three applications under the Right To Information Act for the pipeline to become operational, he added. But the battle was far from over, they learnt soon. The local corporator, who inaugurated the pipeline, milked the issue, claiming through party hoardings that it was his party that had paid for the work that brought water to residents’ homes. This claim, too, was exposed following a series of RTI applications that revealed that the work was carried out using money from the BMC budget. Nair and John, however, now have another battle on their hands; they are nowtrying to get details of another project that was to augment water supply to Marol. “The BMC, this time, has passed the buck on to the MMRDA and agencies that own the underground utilities,’’ John said, promising that the battle was very much on.
Posted by AGNI K East JAAG at 1:28 PM