LAW MUST NOT REMAIN ON PAPER 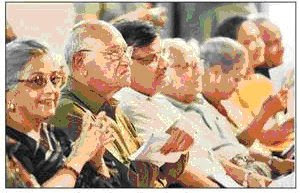 ACTIVISTS AT THE 9TH ANNIVERSARY FUNCTION OF AGNI ON SATURDAY

CITIZENS' GROUPS came together to evoke the rule of law on the ninth anniversary celebrations of AGNI, a citizens' group.
On the backdrop of rampant corruption, vote bank politics and the nexus between land mafia and law enforcers, the various groups - AGNI, CitiSpace, Lok Satta Movement - are spearheading the need to enforce the rule of law. "Law must not remain on paper, it must be ruthlessly enforced," said D.M. Sukhtankar, vice-chairman, AGNI.
Justice Dhananjay Chandrachud highlighted the need to sensitise the judiciary to comprehend diversities, social context, and experimentation to allow creative interpretation of the law.
"Flooding the courts with too many litigations have made the courts dysfunctional," he said. He stressed on the need to incorporate citizens as major stakeholders in the process of governance.
Lauding the Clean Up campaign as an example of active citizen participation, former police commissioner Julio Riberio said: "To enforce the rule of law, a change in people's mindset is needed."
Posted by AGNI K East JAAG at 12:12 PM