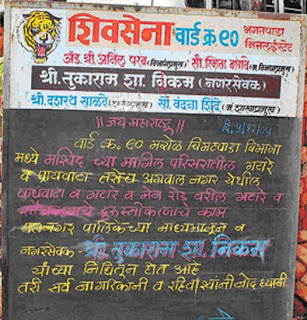 A signboard in the Ganesh Nagar area on Chimatpara Road of Andheri east has robbed the BMC of the appreciation it deserves.On the road outside Kulsum restaurant, where construction of a storm water drain is currently underway, stands a Shiv Sena board that proudly declares in Marathi, “This work is being carried out with the help of the BMC out of corporator Tukaram Nikam’s corporator fund.” Ravi Nair, a resident and volunteer of the Action for Good Governance and Networking in India (AGNI) had filed a Right to Information application in the K-East Ward office, asking for a list of all work orders issued in the area that were to be completed out of Nikam’s funds.“There was no mention of this project in any of the work orders that I procured from the BMC K-east Ward office,” said Nair.Nair’s hunch that Nikam was trying to cash in on the work being done by the municipality was corroborated when DNA contacted Sanjay Borse, assistant engineer maintenance for the K-East Ward. “The storm water drain construction being carried out is out of the BMC’s storm water drain fund,” he said.“The work is being funded by taxpayers. We need to appreciate the municipal authorities for taking their work seriously. Some politicians try to fool people by taking undue credit,” said Nair.Nikam, corporator for Ward 90 and ward committee president of the K-East Ward, said, “We have done so much work in the adjoining area out of the corporator’s fund. That should be brought to people’s notice.” “The BMC doesn’t grant permission for putting up a board on a busy road,” Nair said. “He had done the same in June when a new water pipe was being laid.” Nair lodged a complaint (WR50207682) with the licence department of the municipality.The board put up by the corporator at Ganesh Nagar —Shashikant Bajpai/DNA
Posted by AGNI K East JAAG at 7:55 PM