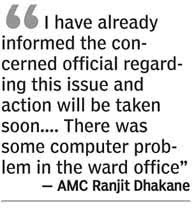 the yearly budget of the brihanmumbai municipal corporation (bmc) is in excess of rs 12,000 crore, but officials within the bmc have been tardy in collecting fines owed by various entities, which run into a few lakhs. bmc had issued letters to mahanagar telephone nigam limited (mtnl) and reliance energy ltd (rel) in may and july, asking them to cough up penalties because they allegedly excavated a road in andheri (e) without prior permissions from the bmc. mtnl had to pay over rs 4 lakh, while rel owes rs 16,000 to the civic authorities, according to a right to information (rti) reply issued to social worker ravi nair, a resident of chimatpada in andheri (e). the rti reply states that till date, the bmc has not collected the money from either party. says nair, "on may 20, i was passing though ganesh nagar road in chimatpada and found some people digging up the road. i stopped there and demanded a copy of the permission order from them, but the supervisor refused and told me to inform the bmc. i then filed a police complaint regarding the matter and informed the bmc regarding the issue." on may 23, the bmc issued a letter to mtnl, stating that they had excavated the stretch on ganesh nagar road without the prior permission of the municipal corporation of greater mumbai (mcgm); it was also stated that there was no responsible officer at the site and mtnl therefore was directed to pay rs 4,21,740 as penalty. after a similar incident occurred near chimatpada in july, nair says he again informed the bmc, after which the bmc sent a penalty letter to rel for not obtaining mcgm permission and asked them to pay a fine of rs 16,351. but, the twist in the tale came when through his rti petition, nair found that the bmc had not collected the moneys owed to it, nor had it deducted the sums owed from the deposits of the two companies. "i was shocked to see the answer in the rti that the bmc hasn't yet collected the fine, nor has it deducted the amount from their deposits. it was the responsibility of the ward officer to take immediate action, but we think he is hand-in-glove with the companies, which is why the fines have not been recovered," added nair. when questioned on the issue, assistant municipal commissioner (amc) ranjit dhakane of k (e) ward said action would be taken soon. "i have already informed the concerned official regarding this issue and action will be taken soon," dhakane said. when asked about the reason for the delay in collecting the fines, he said, "there was some computer problem in the ward office and this was the reason for the delay." m_chirag@dnaindia.netthe dug-up road at chimatpada, andheri (e) - chirag madia
Posted by AGNI K East JAAG at 1:39 PM