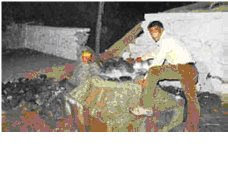 MCGM has said
that the leakages
would be plugged
in 15 days
AGNI K EAST JAAG members had an inspection of water leakage points in K east ward along with Municipal Corporation of Greater Mumbai (MCGM) staff, traffic police and
the contractor who had been assigned the maintenance task for zone 3 of MCGM on May 9. The team assembled at Marol fire brigade at 7 pm and proceeded towards Marol Maroshi road and ended at Andheri Sahar road by 9.30 pm. “We detected 19 major leakages, some of which MCGM was not even aware of. We still have two more roads to cover. We will be doing that too. We have covered a very small portion and there is more to go,” said James John member of AGNI. He added, “They (MCGM) say in fifteen days time they will plug the leakages. We are saying even if they cover 60 percent of the leakages, it would be great.” The inspection was attended by 25 people including around four MCGM officials, PSI H B Patil and many more people including residents. S O Kori, an employee with MCGM said, “Two to four of the leakages have been fixed. The work is on and we expect to finish it in fifteen to twenty days. We are chalking out the program so that the work is completed on time. We are tackling various people and issues and hoping that the work will be done.” v_ritika@
Posted by AGNI K East JAAG at 1:17 PM