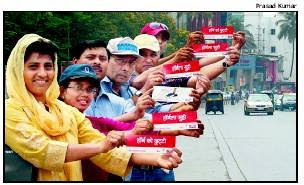 PLACE: Holy Family Junction, Chakala TIME: 2 pm Aflurry of activity erupted at Chakala soon after journos arrived around 1.00 pm. AGNI activists arrived and began slapping anti-honking stickers that read “Hornla sutti’’ and “Horn ko chhutti’’ on the rear of autorickshaws. “Carowners will not allow us to do that. Rickshaw drivers do not object much and, in any case, few own the vehicles they drive,’’ AGNI’s Ashok Pai said. Most bewildered rickshaw drivers — unaware of the campaign — drove away without protest but a few like Vilas Ligade forbade activists from pasting stickers because they would be tough to remove. “Only those who care for their vehicles know what it takes to keep it in shape,’’ Ligade said “But you must tell me why I should not blow the horn,’’ he said. Inspector Narayanrao Patil of the airport traffic division drove up in his car to oversee things. “The anti-honking campaign is timed to coincide with World Health Day so that people become aware that noise is injurious to health. Many of the 100-odd people we fined were upset. They said they had only sounded the horn because the driver in front had made a mistake or because a pedestrian got in the way. They complained that we allowed the ‘actual offender’ to go. But we have a job to do and we will keep at it.’’ Activists turned to move away as the media wrapped up its reportage and prepared to leave. But Chakala petrol station attendants made them pick up the bits of adhesive paper left over from the stickers before they left. FINE’S FAIR The airport traffic division fined 100 drivers till 2 pm. SOUND-BITES The problem motorists like me face is that the dipper or flashlight is not easily seen during day and so the only way to demand right of way is by blowing the horn. This is a city in a hurry. Stephen Fernandes 22-YEAROLD LOGISTICS PROFESSIONAL
Posted by AGNI K East JAAG at 11:50 AM