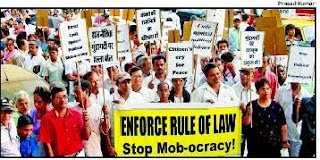 Mumbai: Several NGOs, hundreds of citizens and prominent personalities took out a peace march to the Andheri police station on Sunday to protest against the attack by Raj Thackeray’s supporters on a social activist in January, when the violence against north Indians had peaked. Several prominent social activists from the city had gathered at the Holy Family High School ground in Chakala in Andheri to lament the “mobocracy’’ unleashed by workers of the Maharashtra Navnirman Sena (MNS) against north Indians a few weeks ago. In a similar gathering, social activist James John, who belongs to the Action for Good Governance and Networking in India (AGNI), was assaulted by MNS members for trying to take pictures of their vandalism. John had been admitted to the hospital with broken ribs and a fractured leg. Against this backdrop, activists decried the state’s role as a mute spectator while MNS members went on the rampage. The speakers included RTI activist Shailesh Gandhi, AGNI convener Gerson Da’Cunha, former municipal chief D M Sukhtankar, Independent corporator Adolf D’Souza and antinoise activist Sumera Abdulali. “These are worrying signs. Unless we rise together against this menace, the authorities will never wake up to mobocracy. The police should set up a separate cell to deal with such cases,’’ said Sukhthankar. Godfrey Pimenta, representing the Bombay Catholic Sabha, said the rallyists went to the Andheri police station in a ‘peace march’ after taking permission from the police. “The police first refused to accept the memorandum of the activists,’’ said Pimenta. Finally, the police accepted it saying they will hand it over to the senior police inspector on Monday, he added. The memorandum handed over to the police states that Mumbai is suffering from lawlessness that has never been seen before. Issues are being settled on the streets, mobs are impacting trade and attacking citizens. Politicians, powerbrokers and the police were also blamed. The citizens asked for the enforcement of the rule of law. They said there should be greater collaboration between the people and the police in fighting elements perpetrating mobocracy or mob violence.

CRY AGAINST VIOLENCE: Social activists gathered at the Holy Family High School ground in Chakala to lament the “mobocracy’’ by MNS workers
Posted by AGNI K East JAAG at 12:11 PM