PUT AN END TO ‘MOBOCRACY’ 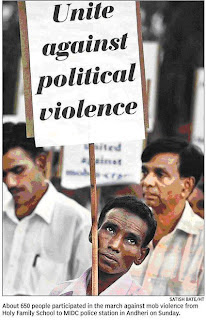 ABOUT 650 people pledged a vote against mob violence or ‘mobocracy' demanding "enforcement of the rule of the law in our city and an end to rule by the mobs" at Andheri on Sunday.
They voiced their solidarity against the mob violence that had sent Action for Good Governance and Networking in India (AGNI) activist James John to the hospital in February. John was busy collecting photographic evidence against mobs pulling down shop shutters the day Maharashtra Navnirman Sena chief Raj Thackeray and the Samajwadi Party's Abu Azmi were arrested. Five people snatched John's camera and attacked him, breaking his ribs and causing a ruptured muscle. Two attackers were arrested but subsequently released on bail.
On Sunday, AGNI organised the peace march, demanding that John's attackers be arrested and mob violence be put to an end. Activists and citizens gathered at the Holy Family School and after an hour-long session, citizens, in rows of three, marched to the MIDC police station holding placards demanding an end to ‘mobocracy'.
John urged citizens to come out and stop mob violence. "If you do not stop them now, they will be in your house tomorrow," said John.
Citizens and activists filed a petition of demand that will be sent to Com missioner of Police Hasan Gafoor and Deputy Chief Minister R.R. Patil. They said that mobs should not be allowed to prevent movie screenings or disrupt art exhibitions. A new law needs to be passed where people caught in vio lence acts should be sent to jail for 10 years, they said. They demanded special officers to look into activists' complaints.
The meeting was presided by former state chief secretary D.M. Sukhtankar, adman and theatre personality Alyque Padamsee, activist Shailesh Gandhi, corporator Adolf D'Souza, AWAZ Foun dation member Sumeria Abdulali and Rita D'sa of the Bombay Catholic Sabha.
Padamsee recalled how after he had once said that Mumbai would always be Bombay, a mob of 250 had gathered outside his house. After condemning mob violence, Padamsee borrowed American civil rights' activist Martin Luther King's words and said: "I have a dream and in that dream youngsters from Maharashtra and Uttar Pradesh walk hand in hand."
gigil.varghese@hindustantimes.com Talk to us Any suggestions on how the police can effectively deal with mob violence?
Email us at htmetro@hindustantimes.com You can also SMS us at HTtalk followed by your message and send it to 54242
Posted by AGNI K East JAAG at 11:25 AM