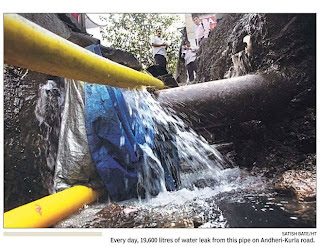 WHILE MUMBAI continues to moan about water shortage in the city, the civic body and the region development authority are engaged in a two-month-long game of passing the parcel, and nobody's seems to be winning.
The two agencies haven't decided who is responsible for repairing a leak in a pipeline on AndheriKurla Road.
The result is water - 19,600 litres a day - instead of reaching homes, is literally going down the drain. And ironically, this is while the Brihanmumbai Municipal Corporation (BMC) is desperately trying to increase its current water supply from 3,350 million litres per day (mld) to the ideal 3,900 mark.
The Andheri-Kurla Road works fall under the jurisdiction of the Mumbai Metropolitan Region Development Authority (MMRDA), but the pipelines are the responsibility of the BMC.
As neither has acted on the crack in the pipeline, it has been covered with stones and sand gunny bags to prevent the 20-ft-high water spring from entering adjoining shops. But the water continues to gush down into a drain with a force enough to fill a 20-litre bucket in a minute and half. The waste - 1,000 buckets of water a day.
"We called up every possible officer but the agencies kept passing the buck to each other," said AGNI activist James John who has been screaming hoarse for the past two months.
"We are really upset that despite constant complaints since November 1, nothing has been done. The problem has now increased and wa ter coming from the tiles has reduced our business," said Satish Shetty, owner of Paarth restaurant adjoining the affected site.
Both agencies, however, have ready explanations.
"The crack was a result of the work at the culvert and pipes being laid by Mahanagar Gas. We informed the BMC about it," said MMRDA Deputy Engineer M. Ghadge, in charge of road works. According to Ghadge, the BMC has not yet fixed the pipe despite the MMRDA getting a replacement for the broken part.
But BMC holds the MMRDA to blame. "MMRDA has to act on it, as the problem is on Andheri-Kurla Road. But now if they are not doing it, we will take action," said Tarang Kumar, assistant engineer at civic Hydraulics Department.
Meanwhile, cracks are forming in adjoining pipes under the road, with water coming out through interlocking tiles. "On the one hand the BMC has announced its Sujal Mumbai scheme, promising round the clock water supply, and assigning Rs 20 crore in each of its 24wards for repairs and maintenance of its pipelines. On the other hand, it remains blind to such a waste," said James.
Middle-class Mumbai uses as much water daily as Shanghai. So why does it never seem like enough? Log on to hindustantimes.com/news/specials/bombay Talk to us Tired of officials passing the buck and wasting the city's resources? Write to us at htmetro@hindustantimes.com or SMS by typing HTtalk your message and send it to 54242
Posted by AGNI K East JAAG at 6:32 PM