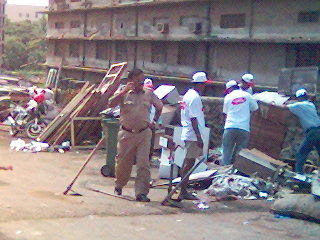 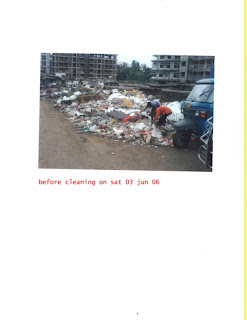 World Environment Day Special
By Asha World Environment Day is ‘just another’ day for most of us। But for some, the significance of this dedicated day is a reason to take the environment seriously and work towards making it cleaner and healthier। One such initiative taken by 91।00 FM with the culminated efforts by AGNI (Action for Good Governance and Networking in India)

K-East Ward and Sanjeevini Trust (Chimat pada) to clean the 11th Road, MIDC, Andheri (E) on the eve of World Environment Day was a huge success.

The cleaning drive taken up on the 4th of June 2006 has left the 11th Road, MIDC, Andheri (E), a lot more clean and environment friendly. The drive initiated by 91.00 FM had no particular area in mind. AGNI (K-East Ward) chose the MIDC area, not randomly, but with a reason. This 11th Road, MIDC is one of the most crowded and busy areas as it houses not only residents, but also a school (Maruti School) and a home for Women in Distress called ‘Shanti Ghar’. The existence of garbage dumps and dirty drains led to a stench and had made commuting very inconvenient, leaving apart the high probability of sickness. Considering the increasing population and the proportionally increasing unhygienic condition, AGNI (K-East Ward) zeroed onto this area.

AGNI (K-East Ward) had to follow procedures by taking permissions from Brihanmumbai Municipal Corporation (BMC) and the MIDC police station, before going ahead with the cleaning drive. Once the permission was sought, the next step was to gather volunteers for this drive. People from AGNI (K-East Ward) and Sanjeevini Trust (Chimat Pada) volunteered for this work, thereby bringing the total number of volunteers to 45. The sight before starting work, seemed like an insurmountable task, but the volunteers put their heart and soul into cleaning this area and making it look altogether different after three hours of continuous work. The basic amenities were taken care of by BMC, which provided the volunteers with brooms, cranes to pick up the garbage and also garbage trucks in order to ease transportation. Huge plastic garbage bins supplied by Neel Kamal were utilized to the fullest, by the volunteers. It was an activity which involved cleaning drains clogged with muck, garbage and roads littered with trash. Although, the surrounding lingered with the unpleasant smell of the garbage, there was an air of enthusiasm amongst the volunteers. Sporting their T-shirts sponsored by Lifebuoy, the volunteers worked as a team on a mission. And while this hard work continued, the MIDC police made sure, they were provided full protection, in order to not disrupt their functioning.

Such cleaning drives are not new to the volunteers of AGNI (K - East Ward), who take up this exercise regularly in different areas. They voluntarily clean up the orthopedic ward of Cooper hospital on the third Sunday of every month. They have been doing this since 14 months now. This cleaning drive is just an added feather to their cap.

This voluntary activity witnessed involvement of people from all age groups ranging from 25 - 70. But the paradoxical part was that none of the residents of 11th Road; MIDC participated in this drive, while all the non residents volunteered to clean up the area. An act, which should have been taken up sincerely and whole heartedly by all the residents, was carried out by a few concerned citizens, who cannot see their city going down the drains. This cleaning drive undertaken on the occasion of World Environment Day is an example of how some people want to bring about a change, but the rest are just indifferent.

The phrase ‘Cleanliness is next to Godliness’ is these days restricted and applicable only to one’s house and not extended to one’s surroundings. But organisations like AGNI (K-East Ward) and Sanjeevini Trust (Chimat Pada) have taken it upon them to prove it otherwise and are determined to make a better society with a cleaner environment.
Posted by AGNI K East JAAG at 1:11 PM