SHAME ON OUR DEMOCRACY 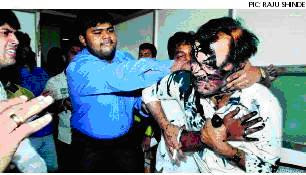 Water dept engineers to get police protection
Following the third incident of violence against a water dept employee on Tuesday, police will provide security at ward offices
GEETA DESAI


In the third incident of violence in less than two months against an employee of the BMC’s water department, the face of an engineer was blackened by 200-odd residents who held an agitation outside the K-East Ward office at Andheri (E) on Tuesday. The incident which was prompted by the water crisis, has led to the municipal commissioner seeking police protection for water dept employees.
The incident which saw water works engineer Tarang Kumar at the receiving end of the residents’ ire, has shocked the water department. The furious engineers of the western suburbs have decided to gather on Wednesday at the K-East Ward office, in a show of solidarity to protest the incident.
Just last month Hydraulic Engineer Dinesh Gondalia was assaulted at the BMC headquarters, and a few days later a pump operator from Deonar was assaulted in the eastern suburbs due to the water crisis.
So much so, Municipal Commissioner Swadhin Kshatriya has now asked Police Commissioner D Sivanandhan to provide security to the engineers of all the 24 civic wards, which he has agreed to.
“Our engineers cannot work under the pressure and are in constant fear of attacks,” said Anil Diggikar, additional municipal commissioner.
Meanwhile, water department engineers of western suburbs have decided not to work on Wednesday and gather at the Andheri office to show solidarity. “Enough is enough. We will seek justice. We are going to represent our case to the commissioner,” said an engineer.
“All the officers are very tense. They are working for the city. They are just employees of the organisation and are not policy makers. No one should take us for granted. We work relentlessly day and night but still incur the wrath of the people,” said Gondalia.
On Tuesday, the residents were agitating against the short supply as well as the illegal selling of water in their area. Furious that ward officer, Ranjit Dhakane, was not present even when he had been informed a day earlier, a few activists approached Tarang Kumar and blackened his face. An offence was registered against four activists who were later arrested by the Andheri police.
Joint Commissioner (Law and Order) Himanshu Roy confirmed the meeting with the municipal commissioner. He said that though the meeting was planned earlier, the issue was relevant as the incident happened the same day.
“We had a discussion and decided to give them protection,” said Roy.


Protesters blacken the face of an engineer at BMC’s hydraulic department at Andheri on Tuesday
Posted by AGNI K East JAAG at 2:00 PM